Back in January we went on a skiing trip to the Val di Fassa in the Italian Dolomites.  We stayed in the town of Canazei near the head of the valley.  What a beautiful and picturesque place!  I have seen photos from a summer trip my mother came on to the same region, and we'd love to come back here in summer to walk around the high passes and valleys, visiting the rifugios and seeing the cows grazing on the alpine pastures.

Apart from skiing, drinking hot chocolate on the slopes, and plenty of red wine back in the chalet every day, we also went on a search for some local cheese.  In the centre of Canazei we found a shop selling a small selection of local and regional cheeses.  We selected the most local of all - Cuor di Fassa, made right in the valley we were staying.

In actual fact, Cuor di Fassa is made locally by Caseificio Sociale Val di Fassa, which is one of the co-operatives that make up the Gruppo Formaggi del Trentino, a consortium that has developed over the years to market the cheeses of the Trentino region.  Probably the most well known cheese they sell is Trentingrana - a DOP protected Grana style cheese made in the region.   The website http://www.trentingrana.it has all the information on the regional cheeses.


Anyway, back to Val di Fassa, where the local co-op also makes a variety of other cheeses, including another famous one called Puzzone di Moena, which we shall have to try one day when we return!  Cuor di Fassa itself was traditionally produced in the cow-herders' huts or in barns at mid-mountain level, or in the community dairies down in the valley floor. It is characterized by the contribution of mountain herbs and flowers.  In times of poverty, it was a staple of the diet along with polenta or boiled potatoes.  These days it is still made from raw cows milk obtained from pastures in the Val di Fassa and Val di Fiemme.  It has 28-29% fat.  The cheese is made into 10 kg wheels and is generally matured for 2-8 months, although there appear to be examples available that have been aged for longer.

In the shop we found, Cuor di Fassa was available in a variety of ages.  We chose to take home a piece of the stagionato (aged) version which we think was about 6-8 months old - although there was an older looking wheel available.

It had a complex aroma, with floral and animal notes dominating, and a slight sense of acetic acid as well as a not quite so pleasant fecal/animal-type aroma.

The rind was firm, even and pale brown in colour, with evidence of brine salting and some rind washing.  The body was very open, perhaps up to 20% of the volume, from gas producing cultures which had produced rough and uneven "eyes".  The texture of the body was springy and elastic.

When we tasted it, the first things we noticed were acidity and an amino acid/histamine type heat, which then gave way to a sweet and complex flavour with floral, pasture and animal notes (think of the smell of a lovely mountain pasture), .  The finish was slightly dirty tasting - not in a bad way, as it was in balance with the rest of the flavours and gave a sense of being connected to the local "terroir".  We described this in our notes as having a "long flavour" i.e. it just kept going as one flavour gave way to another.

Overall, while this was not a perfect cheese, it had loads of flavour and complexity - each time we tasted a piece we found something new - and was a great way to feel linked to the local food culture.  This cheese would be great on a cracker with some condiments or a slice of Italian salami. 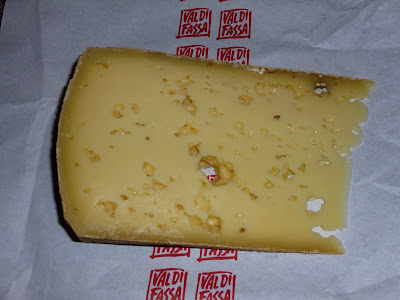 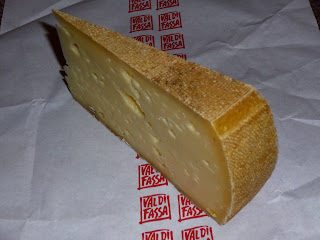