Ok, I have to declare a personal bias for this cheese, as I was one of the technologists involved in developing it when I worked at the Fonterra Research Centre.  But it really is a good cheese - even with my independent hat on, given I no longer work for Fonterra.  It is good to see that all the hard work put in over the years by many researchers has been launched onto the market.

The key thing about Noble Tasty Cheddar is that it has 30% less fat than standard Cheddar cheese - but it still tastes great (if not better than any other supermarket cheeses out there).  Many reduced fat cheeses can be lacking in flavour, and in particular reduced fat cheddars are often rubbery or bitter. Using a combination of well controlled manufacturing conditions, a selection of cultures, and some care, it is possible to actually make this cheese that develops a great flavour and texture as it matures.
The Noble Cheddar in the supermarkets at the moment appears to be at the younger end of the scale, so it has a young cheddary texture, but it has a good amount of flavour with some extra savoury notes not seen in standard Tasty.  From my experience, I know that the flavour of this cheese ages well - as it matures it will develop some strong savoury and slightly fruity notes.  I would expect a good piece of this Noble Cheddar at 12 months old to have stronger and more interesting flavours than a regular Tasty.

As the Noble Cheddar ages, it will develop small crystals both inside the block and on the cut surfaces.  These are a a mix of minerals and amino acids formed as a result of the aging processes going on in the cheese itself, and are perfectly normal.  Some people wait until the cheese is riddled with crystals before they even eat it as they know the flavour will be super strong.  However on the flip side, if you prefer a milder cheese, pick a younger one with less crystals.

A testimony to this cheese is that during its development, it won a gold medal at the 2011 International Cheese Awards in Nantwich, England.

OK, so it's not a gourmet artisan cheese, and I have a personal bias for it, but as far as commercial cheeses from big suppliers go, this is a very good cheese, even before you consider it is 30% reduced in fat! 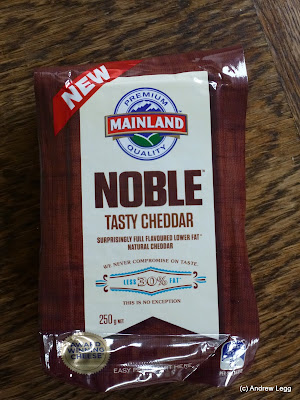