New Zealand has fantastic Gouda cheeses, made by Dutch families who have immigrated over the last few generations and kept up the traditional cheese making methods.  One could even argue that the best Dutch cheeses are found in New Zealand!

On my way North from Christchurch to Nelson, I took a small detour inland through Rangiora to stop in at the Karikaas factory and shop at Loburn.  Karikaas was started in 1984 by Dutch immigrants Karin and Rients Rypma, and makes Dutch-style cheeses and fresh European style dairy products.  Since the late 1980s, the milk they use has been sourced from a single local farm.

So I bought a piece of Vintage Leydon - cut from the wheel - to take on my trip North.  I found a nice calm spot for lunch on the beach at Rabbit Island, near Nelson.  The piece of cheese I had was delicious - it would have been a good vintage Gouda in its own right - slightly sweet, firm but not crumbly, savoury with a slight nuttiness, and clean acid dryness when first put in the mouth.  But the cumin adds an extra dimension - it was not dominant but balanced perfectly with the other flavours of the mature cheese.  This would not have been the case with a 'base' cheese of lesser quality.  This went well with the Danish Salami in my 'road trip wrap' - although next time I'll opt for a salami with less garlic so I can taste the other cheese! 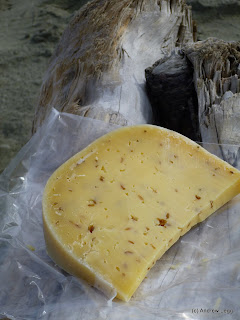 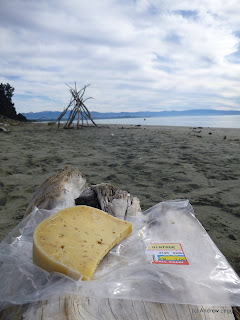