My mother is becoming a good source of cheese samples.  Since she was leaving the country for a lengthy overseas trip, she donated us this small waxed truckle of Cheddar.  We were interested to note that this cheese had been imported all the way from Wensleydale Creamery and made its way to little old Palmerston North, and lamented the fact that we hadn't made the opportunity to visit the Wensleydale creamery when we were living in Cumbria last year.

The Wensleydale Creamery is situated in the heart of the Yorkshire Dales, and has carried on the tradition of hand making cheese using cow's milk from the pastures surrounding the town of Hawes.  It is most famous for Wensleydale cheese, and is the last place where that cheese is still made according to the proper traditions - although other dairies in surrounding counties make Wensleydale, it is not the "real" stuff.  Wensleydale is probably best known from Wallace & Gromit.  But I digress, this story is for another day when we focus on Wensleydale cheese itself.

The Cheddar is certainly presented in an interesting way - the miniature 200g truckle is coated in black wax, which looks pretty special. 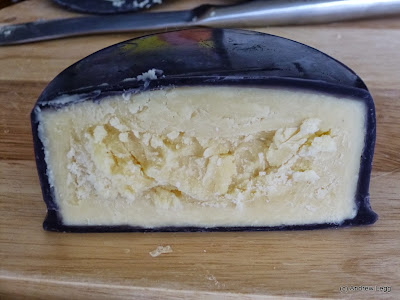 Once we cut into the truckle, we noted the colour and texture.  The paste had quite a light colour, and the texture was slightly crumbly.  In fact , when we squeezed the cheese, it was quite soft, rather than the waxy crumble we expect in Cheddar.  This texture was almost like a "club" or reformed cheese, but may have been due to the small size of the truckle - it may be hard to "press" and maintain the curd in small rounds compared to a big 20kg truckle for example. In terms of flavour,  we expected the wax to have imparted some flavours to the cheese given the surface area of wax involved.  This was not so - we could not taste any waxy off-flavours.  The flavours were nice (there was nothing notably "wrong" with the cheese), but the balance between the acidity, savouriness and sweetness did not remind us of a true Cheddar.  The acid-dryness in our mouths stayed during chewing and swallowing, unlike we would have expected.

This is probably more realistically described as a Cheddary-Wensleydale, which is perfectly reasonable given where it came from.  I think perhaps I have not presented this cheese in the best of light - all that I can say is that on a cheeseboard I can still see this being demolished by hungry guests, especially if there is a nice chutney or savoury jam and some crackers to go with it. 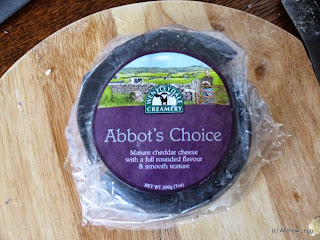