Probiotic cheese is an interesting concept.  First there are people who debate whether the beneficial probiotic cultures actually survive in cheese.  Actually, Fonterra developed and launched a healthy cheese that contained a probiotic culture quite a few years ago (it was called Mainland Inner Balance) and research showed that the probiotic culture was still present in high enough numbers to be labelled as such.  The product did not last on the market, I think it was also lower in fat and did not have great flavour.

I wander what is wrong with eating yoghurt or Yakult or similar to get your probiotic fix?  I'm not sure what value it adds to cheese if the culture doesn't have any extra ripening benefits e.g. flavour.   Anyway, enough of my observations, as Whitestone Cheese has had their probiotic camembert on the market for a few years now and it seems to be doing OK.  So when I saw some on special in the supermarket the other day, I thought I better try some. 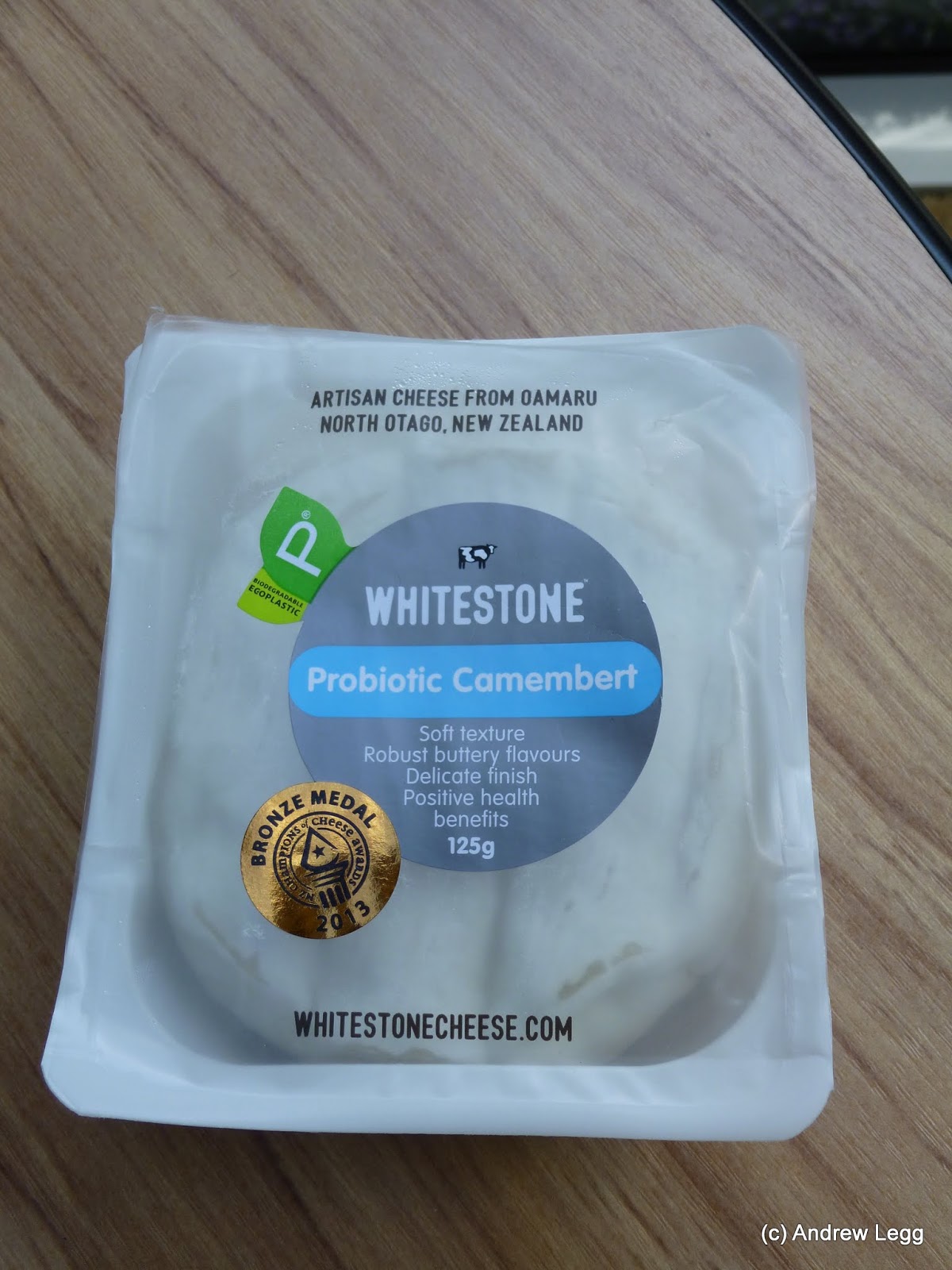 The product looks great in its packaging.  It is nice to see a New Zealand company that has invested in decent packaging to keep its cheeses in a good environment, as well as presenting them attractively to the consumer.  The packaging is not wrapped tightly around the cheese like other supermarket camemberts, and I think the white mould rind looks better for it.  The packaging will also keep more moisture in, which also differentiates the product from the often hockey puck hard camembert found in NZ supermarkets.

The rind looks good with some darker areas of rind showing, not like the perfect white like many kiwis seem to expect.  I could even still see some depressions in the rind from where the cheese had been maturing on wire racks.

The texture was moist, soft and smooth but not runny - what a perfect stabilised Camembert should be.  The flavour was creamy, but fairly plain.  There was nothing wrong with it, there just wasn't much to be excited about either.  On the whole, a pretty good supermarket camembert I thought.  And then...


When I went back to the fridge the next day to have some more.... I found a very brown and unappealing cheese.  I can only attribute this to some sort of reaction with oxygen, as the brown was also under the rind as well as on the cut surfaces of the cheese.  I am guessing the package was filled with a 'modified atmosphere' and there has been some sort of browning reaction involving sugars from fermentation in the cheese which has been exposed' once the package was opened.  Whatever the case, I hope this was an unusual occurrence, and not one that consumers regularly see when they purchase this cheese!
Posted by Andrew Legg at 4:37 PM