One day while we were walking around Paris last October, we stopped to buy a picnic lunch at a small supermarket on a street hidden down the side of a local church.  The usual items for us – some bread rolls, salami and cheeses.  We got a pack of the everyday sliced Swiss style cheese from a mass producer (which was nice but we won’t bother to write about here), but I also spied various packs of smaller more interesting cheeses at pretty good prices.  I grabbed a twin pack of Crottin de Chevre, under the Rians brand, made by Laitieres H. Triballat in the village of Rians, in teh Berry region – almost the dead centre of France.

For €2.80 we got two 60g cheeses which were well packaged in little plastic containers that protected the cheeses and which appeared to be designed to allow them to breathe with minimal packaging touching the rind.  The rind of the cheeses was covered in a fine layer of geotrichum wrinkles, and had a slightly creamy/ivory colour with tinges of white starting to develop.  The curd was firm and cracked slightly when cut, but was creamy and fresh tasting, with only a slight (and pleasant) goat flavour.  The rind development had added a little aroma and flavour to the goat curd and appeared to release a little more goat milk flavour (from the broken down fats) around the rind.  This was very nice on a fresh baguette.  Later in the week Andrew finished it all up by himself (nobody else was a goat cheese fan) on fresh bread with honey. 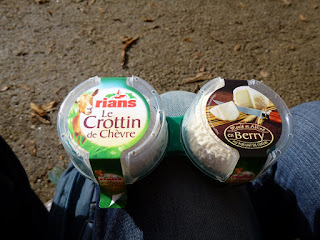 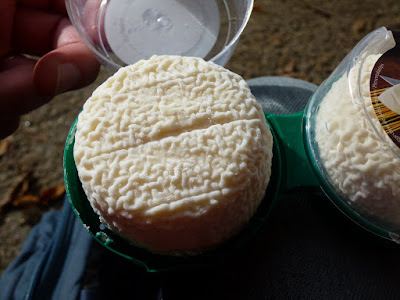 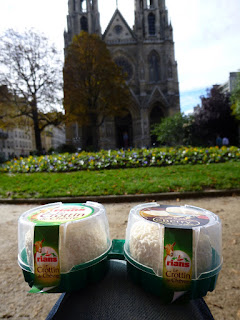