My father and his new wife Kirsten (who is Danish) bought us a piece of nice Danish blue cheese when they visited us in London on their way back from a conference.  They purchased it from a local cheese shop near where they were staying in Denmark.  Based on the label, we know it is a cheese from Bornholms Andelsmejeri, a co-operative on the island of Bornholm in the Baltic sea.  Dad and Kirsten had visited Bornholm a couple of years before and had visited the dairy factory, but unfortunately they could not bring back the cheese to us in New Zealand!

St Clemens is the "export" division/label of Bornholms Andelsmejeri, and the Danish Blue (or Danablu) made under this label has a great pedigree.  It has been named "World Champion" twice at the World Champion Cheese Contest in Wisconsin (in 1980 and 1998).

Because the cheese we tasted was wrapped without a label, we are not totally sure which version of St Clemens Blue it was, but after tasting it we suspect it was possibly the 60+ version (meaning 60%  FDM, or 60% of the non-moisture substance in the cheese is fat).  This would be around 35-36% total fat content in this cheese.   It had a clean outer surface (there is no real rind with this style of cheese) with a white, slightly creamy colour.  The greeny-blue mould was distributed well through the cheese which had a regular open structure.  The flavour was sharp, tangy, and salty with a rich blue mould flavour.  The cheese was not very crumbly, as can be the case with Danablu, and had a nice creamy texture.

We had been given quite a large wedge of this cheese, and only tried a a little before we went on a trip to Paris.  On our return 8 days later, our housemates had finished it all off, so we can only assume they liked it too!   This was a cheese we liked and recommend for blue lovers, although perhaps it is not a cheese to try first if you are new to blue cheeses.  We would love to visit the island of Bornholm and see for ourselves where this cheese is made. 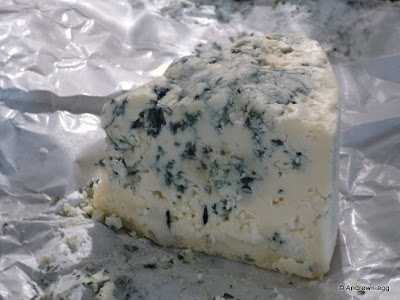