A selection of Mercer cheeses

My father and his wife recently returned from a trip to Auckland, and stopped in at the Mercer Cheese shop just off State Highway 1 just North of Meremere, and purchased lots of different cheeses.  After dinner the other night, we tried a few. The rest we have in the fridge waiting for us - perhaps our Friday night treat with some wine.
I have not written about Mercer Cheese before, but Sandi and I have met cheese maker Albert Alferink numerous times over the last 5 years or so.  Albert's cheeses have  won countless medals over the years at the NZ Champions of Cheese Awards, and Albert himself has won the Champion Cheesemaker Award (for the highest scoring cheese at the awards).  Being one of the traditional Dutch cheese makers in New Zealand, his specialty is Gouda - and it is fantastic.  In fact, Sandi and I used a Mercer mature Gouda as the bottom layer of our wedding (cheese) cake.  But more of that later, as I'm sure I will write about the Gouda one day in another post.

Today's cheeses on the menu were:

Walnut Gouda
This was a young, soft Gouda.  There were plenty of walnuts, and they were well distributed throughout the cheese. The flavour was quite sweet, a little diacetyl/buttery and fresh milky as you would expect.  The mouth feel was soft and creamy, and the nuts add an interesting alternative texture.  We thought this was a little under salted for a Gouda, but this may be because it was so young - as it matures and loses moisture it should come right.  But the slightly lower salt/sweet taste went very well with the walnut flavour - the result being that the young cheese as we ate it was absolutely delicious.  However we would like to see what this particular cheese would be like in a 3-6 months after a bit more maturing - even better?! 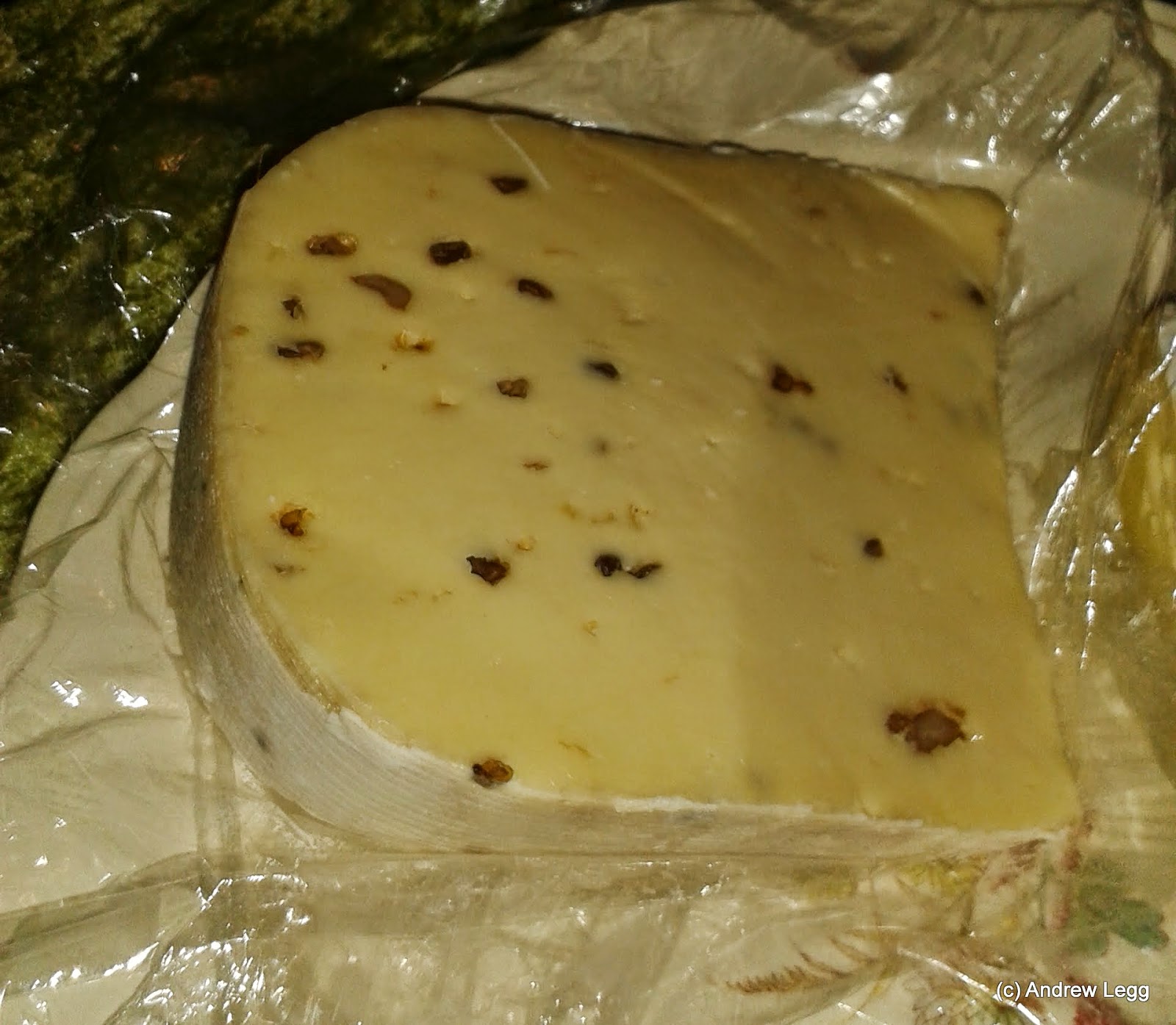 Goat Gouda
We have tasted the Mercer pecorino (sheep cheese) before, and it is fantastic.  Well the Goat Gouda is pretty good too.  It had the typical paler colour of many goat cheeses.  The cheese seemed to be quite well aged, as shown by the crystals in the body and the texture.  However, it had still retained a creamy, smooth and soft mouth feel typical of many goat cheeses.  Along with the strong savoury flavour, pineapple notes and balance between sweet and salt, the cheese was very difficult to stop eating.

Blue Vein (cow)
This appears to have been a 'special', perhaps one off batch.  The piece we tried was a rectangular piece of cheese with a little blue mould on the outside but only a little on the inside where there were a few spaces of 'mechanical openness'. We found the cheese very bitter around the areas of blue, but pleasant where there wasn't any blue.  The taste of the blue seemed young to me, so I might try and ripen it on in my garage maturing 'cave' and see if it mellows out with a bit of age. Not one of Albert's best experiments, but given some of his previous trials I have tried, there is still much promise.